A new project intended to tackle violence in A&E departments has been introduced in Glasgow. The Navigators Scheme, funded by Police Scotland’s Violence Reduction Unit has been operating at Glasgow Royal Infirmary since December 2015.

The project involves two navigators who work to establish a connection with people who are victims or perpetrators of violence. The concept is that it offers help to people in the direst need at exactly the right time when they might be most ready to make a change.

“I think for inner-city hospitals, this should be a standard means for engaging with the homeless and disenfranchised people that we have coming into our departments. The reason I say this is because the current mechanisms are failing or the people are not engaging with them, whereas here we’re getting the navigators catching people at a time when they’re amenable to intervention.”

At the minute, this is just a small pilot scheme, but doctors at the Glasgow Royal Infirmary agree that having navigators in every A&E in Scotland could have a transformative effect on the problems of violence they have to deal with. 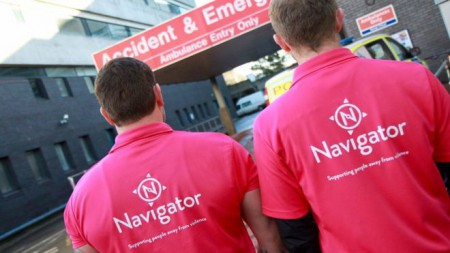 Good to chat with staff from @SBRC_Scotland at the @HolyroodConnect #CyberSecurity conference. We're a small charity without a data/IT specialist. If you're like us, CS literacy might seem daunting. We'll be theming our next newsletter on #CyberSecurity & #OnlineSafety

@TheSCSN @thetimes @NKBLScotland @YouthLinkScot @ElenaWhitham So disappointing (but unsurprising) that the @DailyExpressRB chooses this headline to re-circulate this - https://www.scottishdailyexpress.co.uk/news/scottish-news/yobs-able-run-riot-police-29094458
Ill say it again, young people are not the sum total of #ASB in this country and #preventative approaches work best!

🧵On this week's story about @PoliceScotland response to #ASB - @ScotExpress also covered story referring to 'yobs' in the article below. It is deeply unhelpful in addressing & preventing #ASB if we use stigmatising & othering language. https://www.scottishdailyexpress.co.uk/news/scottish-news/yobs-able-run-riot-police-29094458

Today we're at the @HolyroodConnect #CyberSecurity 🖥️ event. Looking forward to learning more about this important area, including thinking about our own security.