Nuisance phone calls pose a significant problem for older and vulnerable adults in the UK. As well as causing undue stress and leaving millions afraid to pick up their phone, unwanted calls can result in vulnerable people taking ill-advised decisions about their home, their life and finances.

Trading Standards Scotland have been running an innovative trial of call blocking technology, distributing devices to over 500 older and vulnerable consumers, assessing its effectiveness and gathering intelligence about the scale of the nuisance call problems in Scotland. This information will be used to inform future policy in this area.

The project ended in July 2015 and the results show;

Nuisance calls are taken very seriously in Scotland and local authorities have implemented a number of initiatives in this area. This project protected 541 older and vulnerable adults. It is estimated that between 110,000 and 413,000 people in Scotland are vulnerable and seriously inconvenienced by nuisance phone calls on a regular basis. The results of this trial suggest that they could all benefit from nuisance call blocking technology.

Funding is now being sought for a roll out of this project to protect more vulnerable people across Scotland. 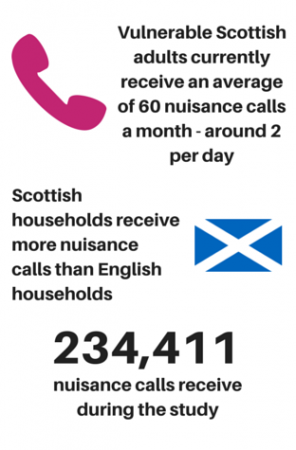